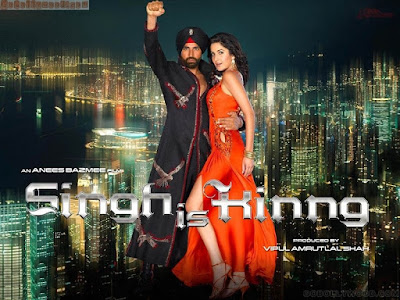 It is so long since I came to this blog and updated - one half a month - and the list of the movies that I have seen thorough this period - crazily long - to include "Singh is King" (a repeat telecast also seen on Indian political scene), "Phonk" (Psst just went there for a good popcorn), "Bachna ae Hasino". On the english movies front - the list is longer than this - "Mummy", "Indiana Jones", "Kungfu Panda", "Wanted", "Taken", "An inconvenient Truth"

Not bad considering that most of the times I had to fit this schedule in my Night Flying phase. This time I have broken my own records on that account also. Night flying from 1230 at night to 0330 was the worst and the best at the same time.

Talking about the movies - "Singh Is King" - it was a kind of movie that sent shivers down my spine when I heard its name. Then came the controversy with the Sikh Clergy - and believe me it made me feel - OH shit here goes Khalsas' again. It will show down the entire community. Well after all this I had to see it for myself. I took my children along. I was however pleasantly surprised. The movie turned out to be a very good time pass - infact I will go ahead and say that it was a good one time watch. I being of the same community am proud that this is one community with sense of humour to feel proud at cracking a joke at themselves and laughing along with other on the same joke. I enjoyed it and so did my wify and children. (Infact one of the reason of liking this movie was that -- come closer psst: I am in love with Katrina)

"Bachana ae Hasino" started and I started whacking my brain as to which english movie had the director picked up the story line from. (It is difficult to believe that it was an original) But I soon gave up trying to draw up comparisons and concentrated at the movie. I loved it as an average make good/feel good movie. Can see once. (I just don't know when I really fell in love with Deepika) Any way Deepika and Lamba were good. Bipasa was not looking her age especially with Ranbir. It could have dropped down in my chart had the story line not been this neat. Not Bad. Infact good time pass - this one too.

I went to see Phoonk only because they said that it is drawing crowds. Maybe - I was not impressed. Had to use my Hip Flask (Hic!) to sit through the movie. No don't get me wrong - I am a Horror fan - but it just stretched it too much.

See we have a difference of taste as far as the movies are concerned - with my wify. She likes Hindi movies - so most of the Hindi movies are logged for her sake by me and I love english movies that I enjoy with my children. I started with "Mummy" - I really did not like it much - I thought the previous versions were better. The Chinese angle was not too good perhaps with the movie. However my children thought that it was great - they liked the special effects - so the vote is theirs!

Thereafter I saw "Indiana Jones" - the critics has written so much about it that I could just not miss it. I once again took children with me voluntarily and my wify involuntarily (Caramelised popcorn does the trick). WOW - I relived my childhood for those two odd hours. I loved it and so did my children. And yeah the critics were right about the movie - it had so much that any die hard fan would love to talk about. It was wonderful.

KungFu Panda was another movie that had made so much and it had reviews that made me see it. I downloaded the movie and watched it with home made popcorn and my children. I slept off half way so I will not be able to tell you much about it except that my daughter really liked it. (She is the non Techie member of the movie fan club of my house)

Al Gore's "An Inconvenient Truth" is not a movie really - it is more of a documentary. I made it compulsory for all my family members to see it. Being a naturalist myself I wanted them to learn how we are Sc**wing up our planet. At the end of it I was impressed. These Americans certainly have style. In any case Al Gore has won Nobel prize for his work on environment. It was as good a movie that I expected. I could see that the lesson has been driven home to my kids and for two days they made effort of switching off all lights before we left home.

Wanted and Taken too were good one time watch but without kids around. It can be embarrassing with kids with Angelina in any movie. But the movie was good - though not great.