I have now been to Khonoma in Nagaland a total of 5 times, the reason being - I wanted to bird for a complete year and document as many species I can during this period. My last trip was a difficult one - the rains started lashing Nagaland like never before and the special dish of the day was a million Leeches crawling up my legs. That made me stick to the track walking almost 15 km along the road and observing any and all birds.
Well, one of the birds that I did find every time I was there to give me the company was the Crested Finchbill. It always fascinated me as this is one bird looked quite unlike the bulbuls that I had seen but was this family. Well, to be frank, that was my observation and others might not agree with me about its looks matching those of bulbul, I am comparing it with the 13 odd bulbuls of India that I have seen. It's the bill that stands out. 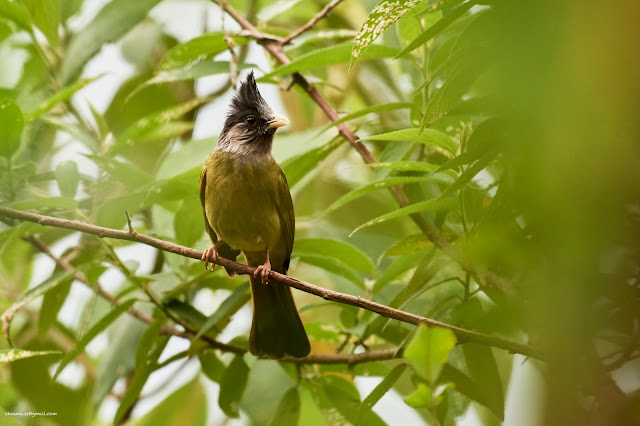 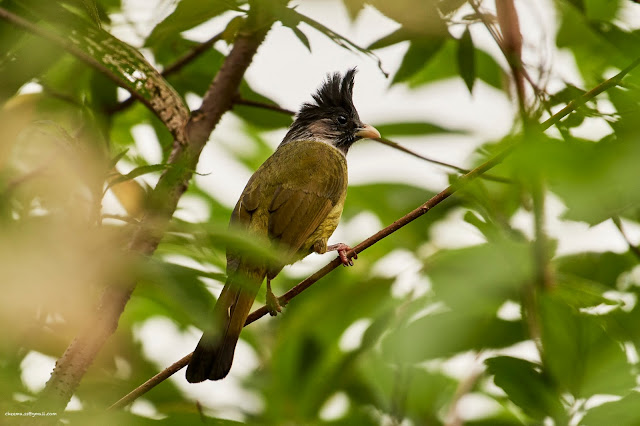 This is the only Bulbul that has a short and conical pale yellow bill. It has a narrow crest that is dark black in males and not so dark in females. The underparts are pale yellow with a bright olive green body. The bird - though seen during all my visits - did not provide too many good shots. It was only in my fourth visit that I got somewhat acceptable shots to put them up here. Infact another observation was that the bird was in large flocks and highly gregarious when not in the breeding season and approaching the breeding season - the bird was in smaller flocks and less vocal.

Though this bird has a fairly large range - that extends from East India all the way to South China. This is one of the birds that has actually gained ground due to the practice of 'Jhum Cultivation' (Slash and burn) practised in Nagaland. It is locally common - though my sightings have been only in this particular place in the country so far. It is a resident from 1400-2500 m and moves down to 900 m in winters. It prefers open evergreen and deciduous forest, secondary growth and scrub.

Listen to the song of the bird - it is close to calls of the Bulbuls.
Posted by S S Cheema at 11:32 2 comments:

Many a time in life you realise that you have some part of you hardwired in your DNA - like take me for and example - being a 'Surdy' - a Sikh by religion - there is a definite fascination for beard - Oh, in this case, the bird with a beard. I have chased it for a fairly long time. The bird has a huge range and it also has some spots near my city and every time I used to get a news - I used to set out as fast I humanly could and miss it every time. Okay - I know, I know - I have myself said it a million times that in birdwatching - the birds decide when they have to show themselves to a birder - even though I feel the hard work to chase them also counts.

Well - coming back to my chase of the birds, I was chasing the one - Blue-bearded Bee-eater and it's sightings were popping up all around me. We have a small and a very dedicated team of birders in Chandigarh and the one who got some great pictures to start with was Mr Narbir, soon his help was sought by others and great pictures popped up by Mr Jasbir and others. By this time I was fairly desperate, so much so that whosoever would spot the bird would page me or call me and I was there as soon as humanly possible. Well, the bird still eluded me. The situation went from bad to worse as now jokes were being cracked both - behind my back and at my face. I did what I could - slogged alone at the places listed as possible sightings, went with whosoever offered me help. Pleaded, threatened others to take me along where they saw it - all to no results whatsoever.
It was one of those fateful days when myself and Mr Rajive went for birding at Morni - a bird sanctuary and stopped at the site where there was a possibility to spot these birds (not to mention that I had visited this site almost 10 times previously). As I had expected - no Bearded Bee-eaters for me yet. We would have birded for another 5 odd hours in Morni - a circuit of 30-40 km and as we set course home - we saw another beautiful Bee-eater - the Chestnut-headed Bee-eater. As we got down to observe them we heard a sound and both of us exclaimed - Blue-bearded Bee-eaters. The sound was so well versed as this was almost more than two and a half year of chase now. We peered through binoculars and saw two birds. Now we were hoping like hell that they come close for a good shot. It did come close, but the bird was sitting against harsh sunlight and pictures were - hmmm... let's say record shots. 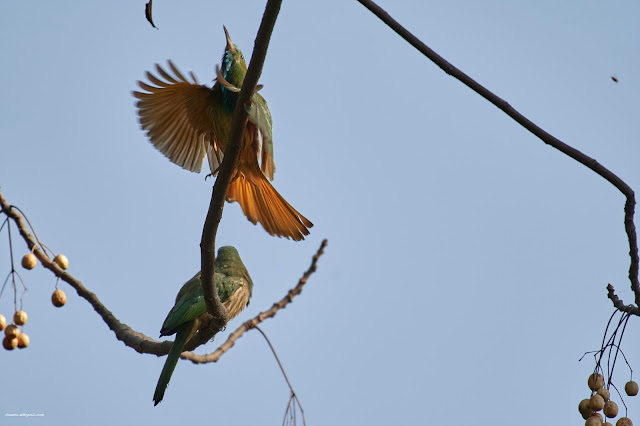 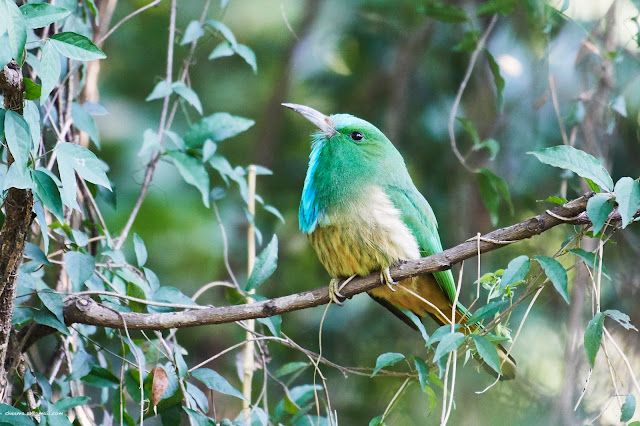 Another few months passed without any sightings - and I had almost forgotten all about the chase when in last week of Jan this year we visited Dehradun on a birding trip. We were birding in FRI (Forest Research Institute) and were almost finishing with our birding session and as we were heading back, we saw two birds - the birds were sitting at an arm's length and I just could not believe my luck. The birds were just not bothered about us - they were busy hunting the bees. I took pictures afraid that they would not allow us to remain so close to them. After about five minutes and a million pictures, I realised that the birds were not bothered about us. I ran back to the car that was parked about 200 yards away and fetched my tripod. I wanted to record their hunting bees on video and my lens - 200-500 mm was just not suitable to make a video handheld. The camera mounted on the tripod, I successfully made two short clips. The birds were just sitting on the branch and grabbing any Bee flying past - that's a kind of sham at the best - a free lunch. At the best, the sally was for a few inches at a time that you would see in the video posted at the end of this write-up.