It has been some time since I have gone birding anywhere. Days to weeks, weeks to months and months to years is how the time passes and so does the changes in our environment around. Life was already tough for the birds but recently the changes have been fast-paced. I have written about this lake earlier also, you can read about it here (Click Me) 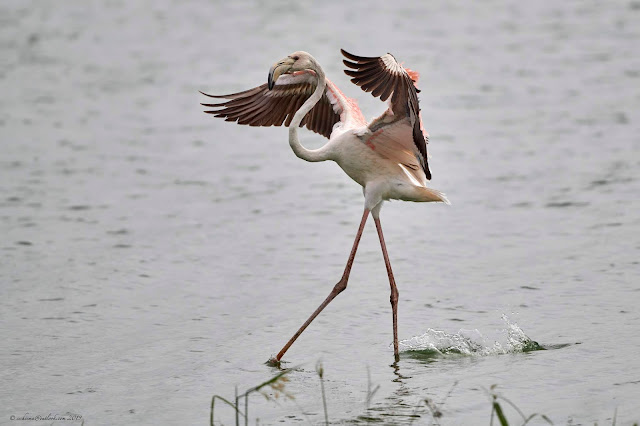 I have visited this place, Ameenpur lake in 2015, 2016, skipped 2017, 2018 and now in 2019. The place has changed rapidly with the peripheral areas cut up into the plots, building already rising and cutting the marshes into smaller areas. There are beer bottles left off from nocturnal party animals, aka Homo Sapiens, parked cars blaring loud music and a fish market that has sprung up nearby. This Lake inspite of all human activity attracts a large breeding colony of Grey and Purple Herons, Flamingos and Pelicans in the right season. However, all is not lost, as there is another group that is working overtime to keep this as a pristine lake and a birders paradise. Firstly, inspite of the fact of all the negativity I have written about, a concentrated effort of a few dedicated environmentalists and birders have got it recognised as Biodiversity Heritage Site. Infact it would not be wrong to say that this is the First body of water in India to be recognised as a Biodiversity Heritage Site and also the first Biodiversity Site to be approved in an urban area. Secondly, a lot of roosting platforms for Pelican have been erected and I was thrilled that five of twenty or so were occupied to capacity with three to five birds roosting on them. Lastly, the thing that touched me was four birders, armed with gloves, trash bags were cleaning the lakeshore of plastic and the everyday trash that was there. It is to these unsung heros that I am dedicating this blog article too. It is extremely difficult to name all of them as number of them played a part- big or small - and there were numerous organisations that played the part too. I remember, Ms Tejdeep Kaur Menon IPS, Director General of Police, Telangana Special Protection Force, organising innumerable times, cleaning of the lake, and then was this idea of hers to have it declared the biodiversity site. This is where a great contribution came from Mr Sailu Giani of Telangana State Biodiversity and groups like HBP (Hyderabad Birding Pals), TCPC (Twin Cities Photography Club), Deccan Birders (erstwhile BSAP), FOTO chronicles and FOFF (Friends of Flora and Fauna) pitched in to ensure that the lake remains a Birders Paradise. I am sure that I would have missed out a million others. It would also be in place to mention the names, the unrecognised heroes whom I saw cleaning the lake and threatened them to pose for a photograph. Incidentally, they are all members of Deccan Birders, erstwhile BSAP, a birders club that I too am a proud member of.

Coming to birding proper. The visit was divided into four short sectors. A small marsh before the lake itself along the road leading to the main lake itself. These marshes never fail to show some species that live along with the marshy, lotus covered lake. The list of all the birds seen is at the end of the blog.

Along the road are the trees with Baya Weavers nests hanging over the water. Sparrows feed on the rice thrown by some good samaritan on the roadside. Bronze-winged Jacanas trot the water lily and lotus leaves. Grey-headed Swamphen along with the chicks was all around. What I missed here this time over were the Pheasant-tailed Jacanas. Bee-eaters, the little green, were also sallying the water top looking for the bees and dragonflies.

Next, we went to the main lake where we stopped for some time over where the bund starts. This always has been a good point for overlooking some interesting waders, Egrets, Painted Storks.
This bund is high and a great walk along the lake. On one side are the marshes (sadly being filled and covered up) where you see Grey Herons breeding in hundreds and some rice fields that have proved to be great for Snipes, Rails, Swamphens, Ibis in the past. This time however we saw the Grey Herons, Purple Herons, Black-headed Ibis and Glossy Ibis. If there is enough time then looking out for Watercock would be a great idea here. It has been spotted by many, other than me.

On the other side is the vast and commanding expanse of the lake. This made it possible to scan the entire lake with binoculars and fairly accurately count the Pelicans and the flamingos.

This lake has a path running on the edges of the lake that has reeds that are used by Streaked Weavers, a variety of warblers in good season, Prinia, munia, darter, francolins and many more. In all, we saw 34 species in about an hour we spent here. A short distance away, a track leads to a southern point on the lake that is used by local fishermen to sell their catch. Over the past few years, more and more people go to buy a fresh catch of fish and this time the crowd was bigger. However, we had an unexpected visitor who flew in front of us to steal a titbit of fish - a Black-crowned Night Heron. They roost in the trees nearby - but to see it so active in the morning and to give us some great pictures - it was a treat.


The last point was where we wanted to reach the Roosting platforms erected for pelicans... the route was searched by Google and there were many hits and misses. The route to the spot gave us some good views of Indian Peafowl, Great Coucal and some other birds.
The track in blue shows all the effort it took us to reach the Northern spot, there were some wrong turns as the tracks were unpaved at most of the places and construction debris dumped here and there. Finally, on reaching the Northern side, we made an interesting observation, all the platforms that were comfortably out of reach of shore, in water were the only ones that the Pelicans had occupied. Those on the banks or near the banks were all empty. By this time the pelicans that were fishing/swimming were roosting. By the time we left this place after about two hours, the pelicans had started soaring in the sky. We also saw the Red-naped Ibis, thus seeing all the three variants of Ibis found in India at different places on this lake itself.

And here I close my blog with the list of birds seen during the half day trip...