Preparing for the US birdwatching visit sprung a surprise that I was not expecting at all. Living in India where we have six species of sparrows, I always felt that the sparrows -were mostly the Asian thing. Out of these five are in and around my city off and out of those - the house sparrow, native to India has been introduced knowingly or unknowingly in the entire world as to say. It was on all three continents that I visited - Australia, Africa, Europe.

As I studied the sparrows of the US - I realised that what I had taken for granted that all over the world the 'Warblers' were the Little Brown Jobs, well that did not be turn out to be true as I travelled North America - the warblers were mostly colourful and not the brown jobs that I had expected. Infact, on digging a little more, I was surprised as the sparrows in North America are categorised as the Little Brown Jobs. Hell, and there was more - there are no less than 38 sparrows in the USA. I still did not realise what trouble was to greet me - the sparrows were migrating and they were virtually everywhere - and they were mostly difficult to identify, perhaps because the plates in the book were not as easy to understand. Though the birds were mostly beautiful still - like so many other birds the females were a pain for me to ID. Slowly and steadily I starting seeing, understanding and recognising the sparrows that I saw. At the end of my trip I had seen nine sparrows of North America. This includes the House sparrow - a bird not native to the USA but very common everywhere I went. Considering the total sparrows there in that country is but a small figure - but I am fine and satisfied with the birds I saw and will carry the memories of these 'Little Brown Jobs' of New world for a long time to come - till we meet next I would say.

I would have ordinarily started with the House Sparrow - by large the largest count I had there and get over with but I will save it for the last. I will start with the sparrow that I feel was the most beautiful by my standards. I would classify the White-throated Sparrow as the one - mainly because it was beautiful and more importantly gave me opportunity to see and appreciate the beauty (besides some good shots). This bird is a mid sized Sparrow and a beautiful one at that.


The second sparrow, Chipping Sparrow that I saw was also breath taking beautiful and comes a close second. Why it came second? I really have no reason at all. But since two of them could not be classified as first - so this one is there in the second slot. Also this is one sparrow that I saw at both the New York/New Jersey area and Texas. Its a clean and crisp with bright rusty crown. This one sparrow - whenever flushed sat on flowering bush / trees and were just beautiful. The time of the year also seemed right for them to sing songs to me.

Next sparrow that I would list here is the Dark-eyed Junco. Though named Junco, this bird is a medium sized sparrow and I was told that there is a lot of geographic variation based on geography. What I saw was the Slate-coloured variety and came across it fairly regularly in the parks and the forests I visited including the Central Park, NY. Had I not read about it - I would not have called it a sparrow at all because of the appearance, the pale bill and the well rounded head. But as an after thought the bird did forge on the ground like a sparrow.

Next group of sparrows are the ones that troubled me as far as ID is concerned. The first one is the Fox Sparrow. When I was tying up with Bob for birding in Central Park he excitedly told me that the Fox Sparrows are here. It instantly became my target to hunt and I saw this bird on two occasions in Central Park and that more or less remained sighings that I had during the trip. The good part was that of the two sightings - one pointed out by Bob was singing as he followed the sound like a hound smelling the blood and that gave me some good views, although not all that good pictures due to the shrub. The Fox sparrow is rich reddish and large sparrow. It has a thick bill and spotted underparts. It was beautiful in its own sense.


The second confusing sparrow, the brown one was the Song Sparrow. It is a medium-sized sparrow and I came across this bird at three locations - Central Park, Great Kills Park and Sandy Hook. Though confusing the bird was in mood to sing so spotting was easy and once I knew the song it was even easier. The other was the central spot on its breast. It was also surprising to learn that the songs of the bird vary regionally.


This next sparrow was an absolute beauty of a bird and unfortunately it took me almost two weeks before I could ID it. Firstly, the bird was spotted only at the Sandy Hook, New Jersey and secondly the book and the birding app did not justify the red beak that I saw in the field. It was only after I met Bill (Birdguide in Texas) that I asked him and he identified the bird as Field Sparrow. The sparrow was small and slender. There was a white eye-ring that confused me and threw me off the course while trying to ID it by myself. All the same - seen it once and the bird now cannot be mistaken ever again. Too beautiful, full stop.

The next was the bird that yet again confused me no ends. The Swamp Sparrow. Bob asked everyone that the Swamp Sparrows have been spotted in the Central Park and have started arriving - and anyone who finds them gets a Hurray. That said and the adrenaline started doing its job - every bloody sparrow I saw after that seemed like a Swamp Sparrow - finally I was too embarrassed to point out the one I saw and actually turned out to be Swamp Sparrow. They were - well kind of everyday sparrows ;-). Medium-sized, Grey face, neat white throat and a rusty collar. Well I am talking about an adult - an immature or non-breeding - would have been like any other sparrow. This was also the sparrow that I photographed from the furthest and have pictures - nothing to write home about. 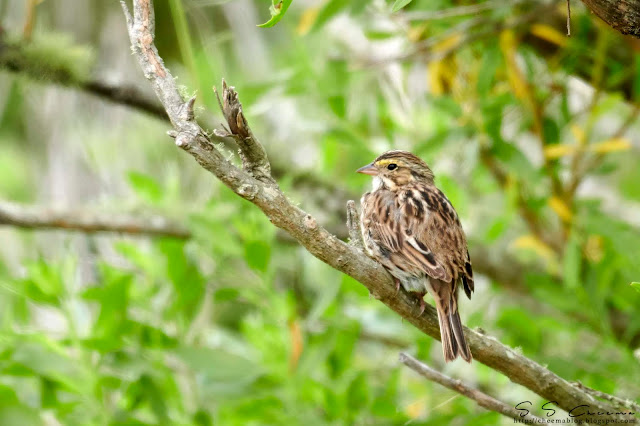 The last of the true sparrow of North America that I witnessed was the Savannah Sparrow. This incidentally, other than House Sparrow, was the only Sparrow that I saw in the north in NY and New Jersey and in the south in Texas. The bird is beautiful like other sparrows and was fairly distinct for recognition due to the yellow eyebrow. Unfortunately this bird also has whitish eyebrow and those are the times that led to identification crisis. This sparrow too is a mid-sized sparrow with a fairly broad bill.

My my - now we come to the introduced - House sparrow. This was one bird that I had the greatest count numbers from New York to New Jersey to Texas. Seeing them over and over again and from India to Australia to Italy - this bloody sparrow is everywhere. I was so busy looking for other birds that inspite of seeing them so commonly during my visit - my mind filtered them and set them aside so much so that when I started writing this article I realised that I do not have even a single picture of the bird from my visit. So the pictures that you see above are from India, taken a month before my visit to the USA.

If you have reached the end of this blog - you really are a bird lover so I will end this with a request. Do follow - write to me and interact - brickbats and good wishes are equally welcome. I do not do this for any kind of monetary benefits - but just about sharing the writings to spread awareness that there is a world other than the humans that Almighty created that is perhaps more beautiful and it has to be looked after. Kick your kids out to spend more time in nature. Do what you can to help nature and its all encompassing beauty.

My birding in the USA can be classified as success and the success in no small measure goes to two birdguide that I came across there. If you ever need them, contact details of Birding Bob (for birding in Central Park) and Mr Bill (for birding in Texas)given below. Both of them were great birders, good human beings and wonderful Bird guides.
Birding Bob - https://www.birdingbob.com/ (all details and schedules are available on his website)Contact 347-703-5554 (US number, use the country code)email: rdcny@pb05.wixshoutout.com (Mail him after establishing contact as the emails tend to be trashed if not from known ID)Bill the birder - Bill Goloby, Director, Penfeathers Tours, LLCContact: 713-542-3473, 832-698-1175 (US number, use country code)email: pfcompany@aol.com