Today I am sharing pictures of a wonderful little bird that was shown by Mr Murray 'The Boatman' during our Daintree river ride.


The bird described as Shiny Flycatcher at some places and Shining Flycatcher at other - is a flycatcher where the male is entirely glossy with iridescent blue-black colour and the female has a Glossy blue-black head and a bright rufous chest.


The female can be easily mixed up with Asian-paradise Flycatcher female had I spotted it by myself.


You will have to pardon my photographs that are not the best I could take as the boat was moving, the light under the rainforest canopy was nothing to talk about and the ISO had to be ramped up to 1600 to get meaningful pictures. The bird inhabits mangroves,rainforest, pandaus, creeks and swamps. We saw the two three birds all over the perches over water and among the stilt roots of mangroves. The call was clean 'whit', 'whit', 'whit'.

We were also lucky to see two nests, which were typical nest that I have seen so many times of Asian-paradise Flycatcher, basically a upright fork, but in this case both over water. The nest was rounded cup of bark strips and looked like bounded with spider web.
Posted by S S Cheema at 19:55 2 comments:

It is so bloody painful to enter into the realm of Swallows, Martins and Swifts. I do get amazed when someone can just look at this variety of birds and say - 'Oh - that's so and so...'

My handicap other than these remains in Raptors and Warblers. It would be some day when I gain some confidence recognising any of these varieties confidently. All the same there had to be a time I jump and start learning. The decision to jump into this came about a week back when I saw two small birds (looking like martins) sallying repeatedly infront of my window in the hotel where I was staying in Hyderabad. So I decided to click some pictures and then get down to identifying them. 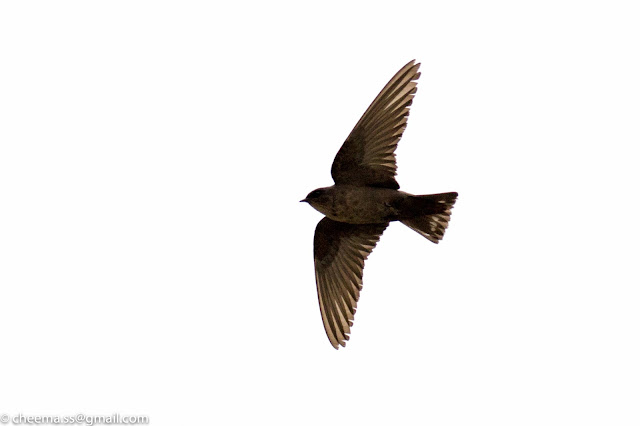 Like all other things - like the saying goes - there is a lot to transverse between cup and the lip. The first problem that cropped up was that I could not open the window of my room, when I called the hotel housekeeping - they said the hotel had a policy to keep the windows closed. It took me two days just convince the hotel manager to agree open the windows as the camera refused to focus through the glass.

Thereafter next few days whenever I got time and was infront of the window - the birds were absent. Finally when I did get them back - I realised that to focus on such small birds flying was a test of my and my camera's ability. I would say the camera was always upto it - it was me who was fighting. The Canon 7D mark ii with 100-400L mark ii lens the kit was fully capable of giving me the best I could expect. 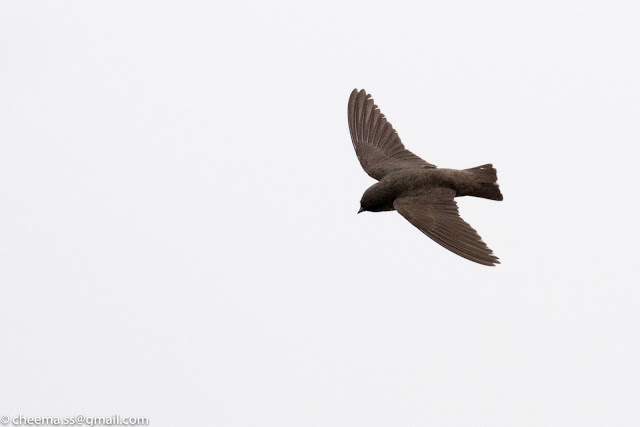 Another problem that I did not foresee was that I was on third floor and the bird spent more time at or below my eye level. At that levels the clutter of buildings and the trees around made the camera refuse focus on the birds. Whenever the birds were above the eye-level - the sky was too bright for these dark colored birds. The respite came today finally with clouded skies. This is the best I could hope for - at 1/5000 shutter speed I had to crank up the iso so please do not mind the poor shots. 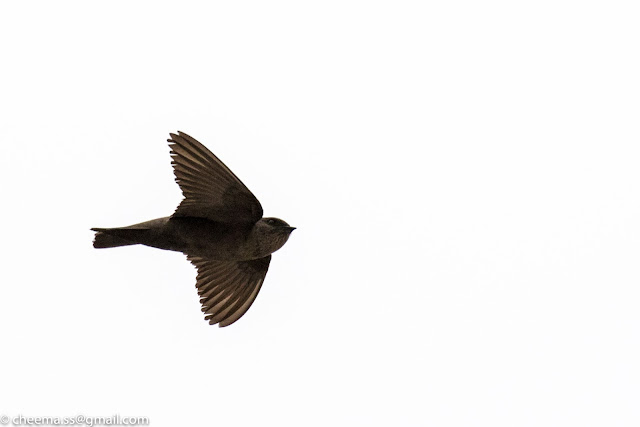 Now let us see why this 'is' Dusky Crag-martin. Firstly - Swallows and martins are different from the Swifts -wherein they (Swifts) have nervous flight patterns and thinner wing. The Swallows and martins have grafeful flight, broader wings and prefer high exposed perches.

Crag-martins are larger than sand-martins. The only Grey-sand martin which could have overlapped the range here has a whitish (silver-grey) throat and breast. So that bird is also discounted. Another bird that would have confused me here was the Eurasian Crag-martin but that is paler and has bigger spots on the tail than all other crag-martins.

Dusky Crag-martin are 13 cm birds that are all-dark brown with streaked pinkish buff throat and breast. The strongest identification is that it is uniformly dusky brown with inconspicuous blackish streaks on rufous throat and breast. It also has small white spots in nearly square tail when fanned. All this may not be evident on the highly cropped and brightened photographs above but it was true on all these counts.
Posted by S S Cheema at 12:26 2 comments: